Hello everybody! My name is Max Dunevitz and I will be your media coordinator for Gator Anime’s 2015-2016 school year. As you know, we recently had our elections for officer positions: check out your new officers here!

As officers, we are all pretty ecstatic about serving the club and running meetings. Here are a few words about our president, Derek Delago:

After being with Gator Anime as a loyal club member, officer, and SwampCon staffer for two years, Derek Delago has taken the mantle of president for Gator Anime’s 16th year in existence. An English Major with aspirations of teaching, Derek Delago is proud to be serving his fellow anime fans and the university as a whole by maintaining Gator Anime’s proud weekly traditions, organizing this year’s SwampCon and reaching out to new members and opportunities.

For the next few months, we’ll be in Summer mode, which means we’ll be watching shows of all sorts. You’ll want to check out Derek’s post on our Facebook Page for more information on that.

This semester, we enjoyed watching Tokyo Ghoul, Noragami, and the incredible Samurai Flamenco. For the upcoming Fall semester, our voting yielded that we’ll be watching Assassination Classroom (which won over Katanagatari by a coin toss!), Barakamon, and Death Parade. Wohoo!

Lastly, for these upcoming semesters, I plan to try and make our website more interactive and diverse, becoming a welcoming  and encouraging place for discussion among club members both new and old, so I’ll be asking questions on the Facebook page for suggestions, comments, etc. on how to improve our website.

Good luck with any finals and wishing you a good Summer,

Thanks for a great semester everybody!

Gator Anime Anime Club Update!!!!!!!!!!!!!!!!!!!!
So last week was the new officer elections as you all know and we have some great new peeps so again congrats to them.
Robert did another Horrible Anime Review of an anime which I don’t remember.
And the member’s choice anime was Bobobo which bo bobo bobo bobo (you can watch here) http://www.watchcartoononline.com/anime/bobobo-bo-bo-bobo
All of those who went to Lake Wauberg are awesome. And if you’re going to MegaCon make sure you’ve figured everything out! And next week we’ll be voting on the anime for the Fall so make sure to get your asses there.
Till next time, Gator Anime Alright, so I came across this anime a looong time ago, but never really set aside the time to watch it until recently. Although it’s what Wikipedia said, I don’t think “drama” is the right word to describe the feel of anime like this—although I haven’t seen that many, I think this has more of the feel of a Studio Ghibli film (I guess you could call Romeo and Juliet the “dramatized” version of this anime, however). Arashi no Yoru Ni is a sincere and open-hearted anime that is focused on understanding and accepting others and finding strength in friends (like a lot of other anime I watch, I know, I’m a pansy :P).

Arashi no Yori Ni was originally a children’s book written by Yuichi Kimura. The book’s popularity prompted the author to develop several sequels which were compiled and made into this film. The plot details a goat named Mei who, when he was just a kid (haha…), witnessed his mother’s death at the hands of vicious wolves (although he has little recollection of this event). In a scene many years later, Mei gets separated from his friends in a storm and seeks shelter, alone, in a dark old shack. While inside, another creature named Gabu enters the shack for shelter, and, although they cannot see or smell each other, the two begin to engage in friendly conversation. They soon find themselves enjoying each other’s company, and when the storm dies down, they agree to meet the next day for lunch.

When Mei goes to meet his new friend, he is shocked to find that Gabu is a wolf! Gabu is equally surprised to find that he has befriended his favorite food. Amazingly though, the two make up like old chums and continue bonding together. It turns out that Mei is a bit naive and Gabu is somewhat timid and friendly for a wolf—these characteristics soon develop into a sense of trust and deep friendship between the two. Eventually, however, our friends have to face up to the anger, confusion, and pressures of their same-species peers who forbid such a friendship and belittle them for their foolishness: Gabu is seen as a betrayer and a weakling by his wolf pack for befriending a goat and Mei is seen too as a betrayer and acting stupidly by his herd for being friends with a wolf. As tension builds between the wolves and the goats with winter drawing near and food becoming scare, Gabu faces the penalty of being put to death by his own pack for betrayal. Gabu and Mei then decide to make a drastic move and flee their groups together by leaping into a river in an attempt to escape. They are soon pursued by the wolves, however, and the adventure to reach a haven far away where no one will criticize them for their friendship begins. 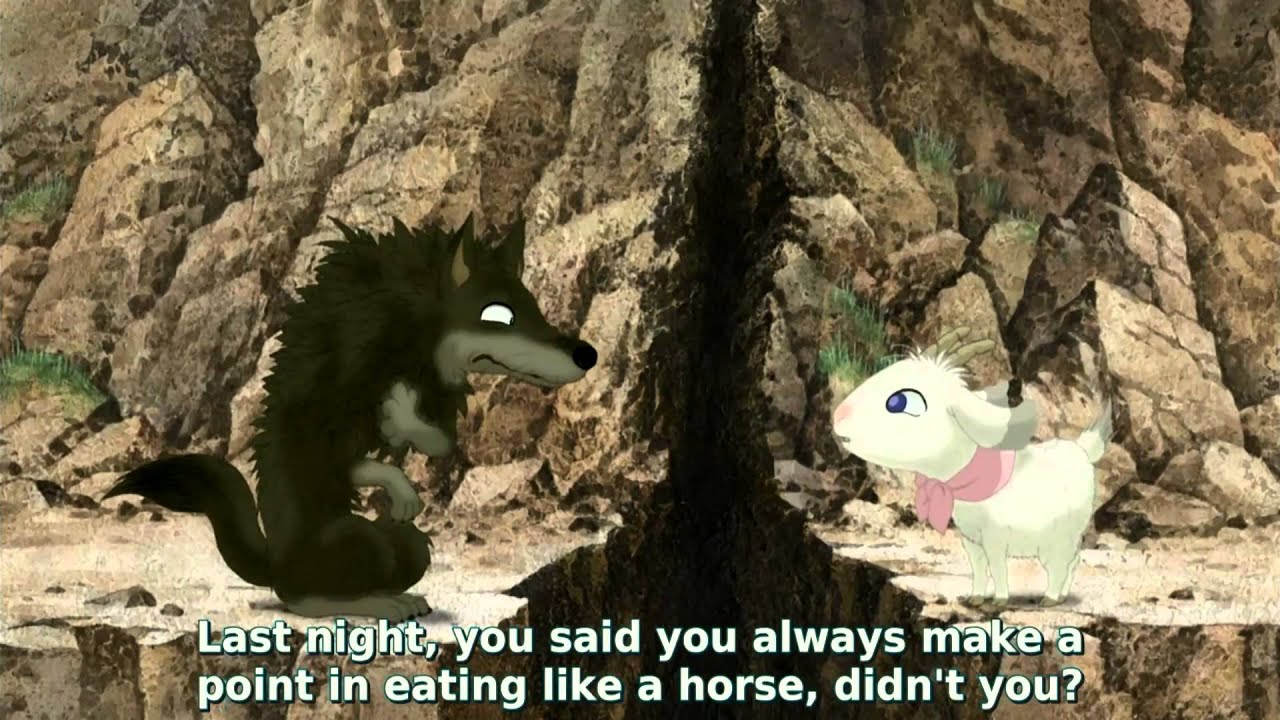 Alright, so I know this sounds like a pretty ridiculous and mushy story from just reading the synopsis. However, looking at the some of the details put in by the creators reveals a degree of sincerity and seriousness behind the plot of Arashi no Yoru Ni.

For one, despite the movie’s happy nature and positive messages, it begins with the scene of Mei’s mother being killed by wolves. The setting is bleak, emphasized by the creators’ choices of colors and style of animation, setting the tone for a depressing and serious movie. But they soon jump right into Mei meeting Gabu years later and developing a happy friendship. Juxtaposing scenes of sadness and horror with those of lightheartedness and innocence shows that, although this is a “kid’s” movie, the creators aren’t just trying to convey a happy-go-lucky world that we cannot empathize with, but a realistic one with life-like strife and emotions. Many other media use this technique as well, examples that come to my mind being Digimon Tamers and The Legend of Zelda: Majora’s Mask. Majora’s mask follows a seemingly innocent plot line, but the characters and settings themselves are often dark, twisted, and mysterious, which is unique for a Zelda game. This makes it less likely to be labeled as a “children’s” game, although it technically is. Similarly, Arashi no Yoru Ni, which is directed towards a younger audience, begins on a darker note, which I think gives the anime a more realistic and empathetic feel.

Arashi no Yoru Ni tells a story of friendship and love that surpasses individual differences. Consider other anime we’ve watched whose characters also face barriers to friendship and acceptance like: different personalities and opinions (Angel Beats!), different senses of justice (our beloved Samurai Flamenco), or even different ethnic groups/social demographics (kind of like Tokyo Ghoul). Although this in itself is a common (and sometimes badly used) theme, I find Arashi no Yoru Ni such a compelling anime because this difference involves one friend wanting to eat the other, and yet restraining himself to protect them both: I seriously can’t think of any factor more divisive of a barrier to friendship! I feel that this relationship between what-we-love and what-we-eat is expressed by the intense passion expressed by some vegans, vegetarians, and animal rights activists, and even though it’s treated more simply in Arashi no Yoru Ni than it is in real life, I find it one of the more creative and unique approaches to this resonant theme of friendship surpassing individual differences (this also reminds me of one of last semester’s anime, Silver Spoon, which tells us that it’s okay to feel ambivalent and have feelings of love towards the food you eat and that dealing with that ambivalence is just a part of life).

Another note I appreciate is the use of voice acting and the emphasis it places on each character’s personality. When I first saw Mei, I expected him to have a high pitched, youngish voice and be a childish character. Instead, Mei sounds more like a young man and seems more lighthearted than childish, which makes the watcher realize that he isn’t simply just being naive by befriending a wolf, but actually being understanding and trusting of Gabu. And although Gabu may look a bit rough around the edges or even devious, his voice acting portrays him more as somewhat of a scruffy misfit, which goes to show how sometimes appearances can be misleading in conveying an individual’s personality and choice of friends.

It’s been said hundreds of times by parent’s to children: making friends is important—heck, my mom still calls me and asks if I’ve made any new friends in college nearly every other week! But sometimes, I feel that we overlook the importance of genuine friendships out of fear that we’ll be misunderstood or seen as silly and weak. As a result, we sometimes hold contradictory views or say things that we don’t really mean to our friends: this is okay and a perfectly normal part of being human. Yet I like to see Gabu and Mei’s attitudes towards one another as the ideal model for a happy friendship. A lot of people like to interpret Mei and Gabu’s relationship as a gay romance—and it may certainly be so! I find the fact that people are willing to interpret a children’s movie through the lens of something as serious as a romantic relationship shows that fans are genuinely considering Arashi no Yoru Ni and, consequently, the importance of true friendships from an honest and sincere point of view. If you wanted to run for an office, run!!! Nothing’s wrong with a little friendly competition, and if you care about the club, go for it. It’s never too late to give it a try.
You can sign up here: https://docs.google.com/forms/d/1W5n1iM2SiEtbYuVna-Iy_aC3vooGkAlcAKL6dGPhlcU/viewform

If you aren’t running, come anyways to vote. Bring popcorn and tomatoes just in case things get headed.
Last week:
Robert dazzled us with his bad anime review. If you, for some odd reason, loved the show, you can watch it here: http://www.crunchyroll.com/…/episode-1-high-school-girl-fig…
And the member’s choice was Barakamon which you can watch here:http://www.funimation.com/shows/barakamon
VOTE VOTE VOTE !!!!! And see ya later!