Gekkan Shoujo Nozaki-kun (English title: Monthly Girl’s Nozaki-kun) is a romance comedy centered around Chiyo Sakura, her crush Umetaro Nozaki, and his other assistants.  Sakura confesses her love for Nozaki, but he mistakes her as being a fan and when they go to his house she ends up inking manga pages for him.  As she leaves she figures out that he’s actually a popular shoujo manga artist with the pen name Sakiko Yumeno.  Figuring that even though Nozaki is too dense to notice her feelings despite his line of work Sakura decides to work with him in order to spend more time with him and get to know him more.  In the course of the anime more characters are revealed that are either Nozaki’s other assistants or serve as inspirations for his characters.

This anime aired from July 6th to September 21st, 2014 in a twelve episode season directed by Mitsue Yamazaki.  Dogakobo is the animation studio that animated Gekkan Shoujo Nozaki-kun and they’ve animated shows like Yuruyuri, GJ-bu, and Makai Ouji: Devils and Realist.  The opening is a jazzy and catchy song called “Kimi Janakya Dame Mitai” and is performed by Masayoshi Ooshi.   The ending is “Uraomote Fortune” and is performed by Ari Ozawa.  In North America Gekkan Shoujo Nozaki-kun is licensed by Sentai Filmworks and can be seen on crunchyroll.

Normally I’m not into romance comedies, but there’s a reason I love this anime.  This anime breaks a lot of stereotypes with the characters.  The main character, Nozaki, is completely oblivious to Sakura’s feelings and misinterprets a lot of her words and actions.  Despite his rather aloof looking face he’s quite eccentric when it comes to his manga.  So much so that the other characters often get caught up in his antics in the search for inspiration or examples.  He even fanboys over his editor.  While he is male he plays the role of the typical shoujo heroine.  Meanwhile the actual heroine of the anime plays the “straight man” or tsukkomi role.  She does have her shoujo moments mostly when trying to confess to Nozaki though so it’s not complete.  She does have to deal with everyone’s antics though as she is the most normal character of the series.

The rest of the cast is paired off other than one person, the third character we’re introduced to: Mikoto Mikoshiba affectionately called Mikorin.  Mikorin is an assistant to Nozaki and appears to have a punkish and flirty attitude.  However he’s actually shy and quickly gets embarrassed afterwards.  Unbeknownst to him, Mikorin is actually the character inspiration for Nozaki’s heroine.   He has a “Kohai notice me” relationship with Sakura.  Other breaking of normal stereotypes is Masayuki Hori, president of the drama club who is tsundere with his crush, Yuu Kashima.  Kashima also breaks stereotypes as she is the “school prince”.  Hirotaka Wakamatsu of the basketball club also has tsundere characteristics as he’s in a love/hate relationship with Yuzuki Seo a very blunt, rude, and tomboyish character.

Not only does this series rewrite character stereotypes, but it also makes fun of situational stereotypes.  For example sharing an umbrella.  In case with Nozaki and Sakura they attempt to share, but their height differences leaves them both soaking wet.  While with Kashima’s popularity she ends up in a mass of umbrellas that block the road.  There’s so many other situations that happen yet don’t turn out as expected.

Onto the voice actors.  Nozaki is voiced by the excellent Yuuichi Nakamura who has played as several main characters such as Alto Saotome from Macross Frontier, Tomoya Okazaki from CLANNAD, and some supporting characters such as Ringo Tsukimiya from Uta no Prince-sama.  Meanwhile the seiyuu for Sakura, Ai Ozawa, has only had one main role as Nosomi Moritomo from The Rolling Girls and two other supporting roles.  Ozawa is the only really new seiyuu as the rest of the cast has multiple main roles.  Miyuki Sawashiro, Ryouhei Kimura, and Yuuki Ono to name a few from the rest of the cast.

Over all I give Gekkan Shoujo 8 out of 10.  Mostly because Sakura and Nozaki do not truly break away from the typical roles they’re in.  The other parts is because I want more of this series.  The last episode cameos character that are from the manga so I feel that while it can be taken as a declaration of a second season it’s in bad taste to do so in that method.

Amatsu Otome moved down to Florida late December 2013 and has been attending Sante Fe in order to get enough credits to get into UF by Fall 2015.  She’s an avid anime watcher, part-time gamer, part-time cosplayer, and full-time college student.

Gatchaman Crowds is an action sci-fy anime that is about a group of humans and aliens that protect the Earth from aliens that cause problems or wishes to destroy Earth.  This group known as the Gatchaman are able to transform via invoking their NOTE which gives them an almost mecha or armor appearance and special powers that they use to subdue the problematic aliens in order to ship them off for judgment and imprisonment.  The story takes place summer 2015 and in the city of Tachikawa, Japan.  The show starts out with the recruitment of their newest member, Hajime Ichinose, and follows her in changing the team and saving the world. 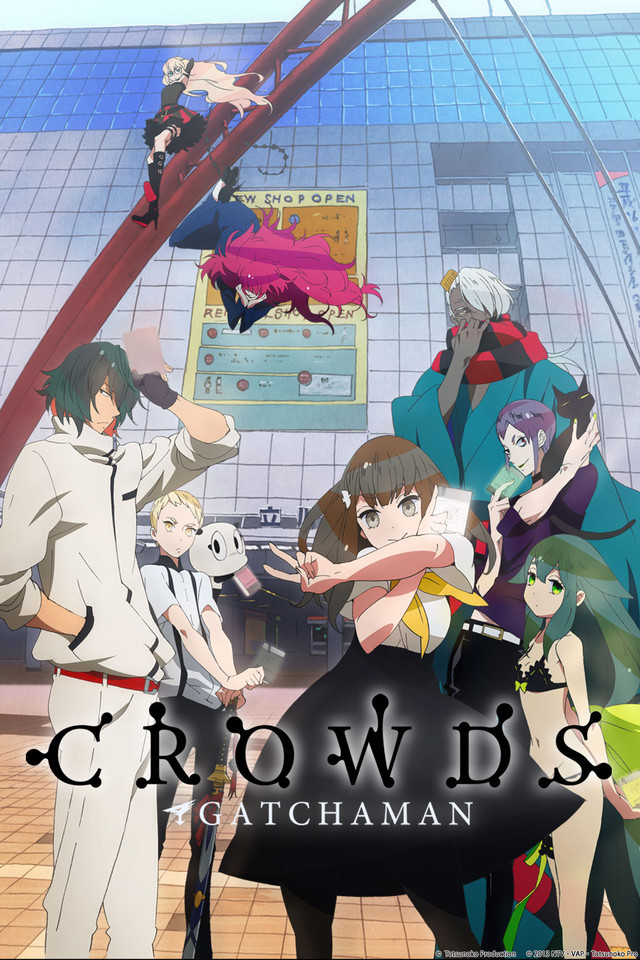 Gatchaman Crowds aired from July 17 to September 27, 2013 in a 12 episode season.  There is a 13th episode that was included with the Blu-Ray and DVD release.  More on that later.  Gatchaman Crowds is the fifth Gatchaman series that started in the 1972, however it hold no relation to the original series besides some bird motifs and transformation word.  Kenji Nakamura is the freelance director of this series and is also known for doing the Monoke and Tsuritama series.  Tatsunoko Production does the animation of all of the Gatchaman series and some of their most well known series are Speed Racer and Neon Genesis Evangelion.  Sentai Filmworks procured the rights of 12 episodes and has dubbed them.  The dub is or will be shown on the The Anime Network.  The background music is produced by Taka Iwasaki while the opening “Crowds” is by WHITE ASH and the ending “INNOCENT NOTE” is by Maaya Uchida.

Okay now that the summary and technical stuff is done and over with I’ll get less formal.

Gatchaman Crowds while being labeled at a superhero type anime isn’t a conventional one.  In fact you see the character out of their transformation more than in it.  Which I personally like because it shows that the characters aren’t just their transformation.  It actually lends to a theme being that everyone can be a superhero and that you don’t need super powers to save the world and help others out.  Which is probably the most prevalent theme that appears in the anime.

One of the things I really like is the diversity of the characters and not just because some of them are aliens.  Gatchaman Crowds attempts to show homosexuality, transgender, and androgynous characters which it’s often done.  However they tend to gloss over it which is fine because it’s probably better than going deep with it and making the whole show about that, but at times it feels too casual.  For me it leaves me wanting more explanation or it being a casual topic that would do wonders for character development for a few characters.  Instead fans are made to make up their own opinions on what sexuality or even gender the characters are. Objectively though I think they did well at least trying to show sensitive issues without making the series about those issues like so many want.

The thing that got me into Gatchaman crowds was also one of the things that took some time for me to get used to and that’s the art style.  Personally drawn to anything colorful Gatchaman Crowds does this wonderfully.  The actual art is something I’m not usually used to seeing.  Each character is given a completely different look and it’s really great since I’ve noticed a lot of anime have almost stock appearance types.  They share aspects with each character and eventually the characters tend to blend together.  Gatchaman Crowds doesn’t do this so each character has a truly different look.  (Background or one episode characters naturally don’t apply.)  Occasionally somethings will catch me off guard and most of the time it’s Hajime.  She’s a very expressive character so she has the most unique looking expressions I’ve seen.  Some of which looks rather weird.  The opening art is wonderful too it has a lot of colors and uses some techniques that at the time was new for me to see in an anime.  It combines 2D animation, time-lapse real life video, and 3D models.  Normally I’d hate such a blend because it’s not done well.  In the opening though it’s done exceptionally to the point where I hadn’t even realized that there was real life video in it until rewatching in order to write about the opening.  What I also loved about the opening was throughout the show everyone’s Gatchaman forms are shown. At the beginning you see just Hajime, but then by the end it’s everyone. The ending I’d rather ignore since the 3D models they use prevalently in it look like the very early and bad Miku Miku Dance models.  The models are stiff and it really irks me how horrible they look with a photo background.  The ending animation sorta shows how how much of a budget they spent on it.  Which is good considering that majority of the ending budget must have went towards the actual show. Since I’ve been talking about the opening and ending let me move onto the music.  I love both the opening and ending, but it’s the actual soudtrack that’s the best.  I’ve downloaded a lot of OSTs from various and a broad range of anime, but the Gatchaman Crowds OST is my favorite of all time.  Most

of the songs are upbeat and really motivational which makes for great exercise and driving music.

The next best thing is the voice actors.  Gatchaman Crowds as anime A-list seiyuu including Mamoru Miyano, Daisuke Namikawa, Aya Hirano, and Katsuji Mori as well as some more up and coming or uncommon seiyuu filling out the rest of the characters.  The total cast is wonderful and the voices really fit the personality types not to mention how well the seiyuu can act.

The characters themselves I’ve grown incredibly attached to.  It was rather different in the beginning as I couldn’t seem to like half the cast until halfway through when I finally understood how the characters’ minds works or saw their growth.  For example I really couldn’t understand Hajime until one event nearly half way through and Sugane much later.  Now I really admire Hajime and Sugane is just a giant lovable dork.

Overall I give this anime a 9 out of 10 and the only reason for that is because of how badly the tv series ran out of time leaving loopholes and needed the 13th DVD episode which will not be dubbed.  Gatchaman Crowds has changed my personal outlook on certain things and I’m incredibly attached to this series.  That’s why it’s one of my favorite anime and why it’s the first anime I’m reviewing.  It’s such a precious series to me that I want to share it with others.  You can watch the 12 tv episodes on crunchyroll with a simple search you can watch the 13th DVD episode at

Amatsu Otome moved down to Florida late December 2013 and has been attending Sante Fe in order to get enough credits to get into UF by Fall 2015.  She’s an avid anime watcher, part-time gamer, part-time cosplayer, and full-time college student.